The Tri County Thoroughbred Corral invited GPMC members to join in on a dinner run on Saturday, October 24.

We gathered at the Cecil Fire Hall

There were 4 Mustangs in the lineup, and 3 were from the GPMC

The TCTC guys had fun giving Chuck a hard time

Dinner was at the Crooked Dock Restaurant in Wellsburg, WV

“Greetings from the West Coast Chapter of GPMC.   This past Sunday, Twilight and I attended the 36th Annual Mustangs By The Bay show sponsored by the Mustang Club of San Diego.  This show, which attracts 300 plus Mustangs is held at the very picturesque Embarcadero Park North along San Diego Bay.  Looking to the east, you see the San Diego skyline and to the west you see Coronado, home to San Diego based Aircraft Carriers and the North Island Naval Air Station.  Suffice it to say, between the beautiful views and the even more beautiful Mustangs, it was an awesome way to spend a Sunday.  We did get a bit of rain but it was very amusing to watch everyone, including me, get out their towels and dry off their Mustangs multiple times during the morning.  By afternoon the rain had stopped and the sun even poked its way out a few times.
The rain did not detract from the show one iota, although it did appear that a few less cards were present, possibly due to the weather.  The show was all pre-registered so those that did not attend did at least support the charities with their entry fee.

This year’s theme was Mustang Generations and awards were given out in 6 different Generational categories.  2015’s, of which there were many, were also grouped in their own separate category.

I think my favorite car, and I wish I had taken a picture, was a Red 1977 Mustang II hatchback in pristine condition.  This car won its category but there was only one other Mustang II in attendance so I guess it was a slam dunk.  The other Mustang II was a white 1975 coupe that had originally been sold in Hawaii and then bought and transported to California.  The car was not pristine and the engine compartment was kind of filthy but the owner loved his car and I appreciated it too.  After all, I was a teen in the 70’s and that was the Mustang of my youth.

Twilight looked spiffy but I had a Boss 302 on one side and GT/CS on the other side so she was sadly ignored by much of the public.  No worries though, she is well loved and she is anxious to get home to Pennsylvania in a couple of years.

Cheers,
Malcolm
PS-Pictures show the vehicles lining up, in the rain, to get organized., a view over Twilight’s roof as we are lined up, and if you look closely, you will see the GPMC flag on the dashboard.  I also wore my GPMC polo shirt during the show.”

The June 3 meeting was held at Monroeville Community Park, where Dwight grilled hot dogs and everyone brought side dishes to share. 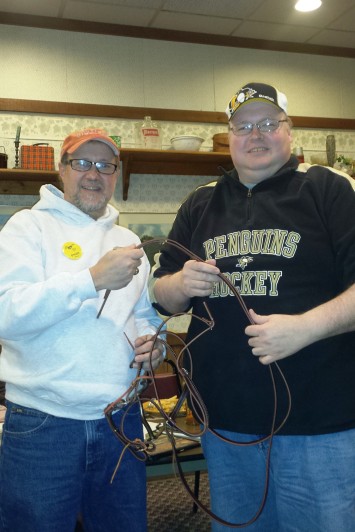 At the January 7, 2015 meeting, Dwight handed over the reins (literally!) to Tim. 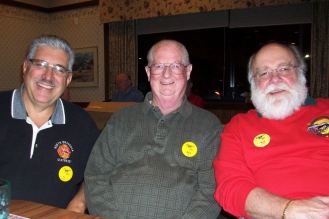 GPMC members Mike DeLeonibus and Ray Radzevick attended a NASCAR race in Richmond, Virginia.  Looks like they had a great time!

Ray & Mike in the stands

In August, we had our first meeting at the Croatian Center in Ross Township.  Our Grillmeister, Dwight, grilled hot dogs before the meeting.

In July, we had our first meeting at the Moon Community Park.  It was well attended, and Dwight grilled hot dogs (is there a connection?)

Ken is not shy about trying out the hot dogs

Tom, one of our newer members

Mike shows his skills with crutches